Diwali is the Indian festival celebrated in autumn season every year i.e. in the most in the month of October and November. The festival name Diwali is redirected from the word ‘Deepavali’.

Diwali is commonly celebrated by the Hindu community that may also include; Jains, Sikhs, and Buddhists and also celebrated by many people all over the world as the symbol of love, peace, and happiness.

Diwali is popularly known as ‘festival of lights’ because people decorate their homes, offices, and temples with lights and diyas. The streets are full of lights as Diwali is the symbol of ‘victory over darkness’. The festival is continued with crazy excitement for straight 3-4 days and end up with Pooja and burning crackers.

Yes, everybody knows that burning crackers will lead to poisonous pollution still we all follow such rituals to express our love and share our feeling for the festival with families and friends. The percentage of people burning crackers is falling year by year as the government is banning dealers who sell it and I think it is the great effort towards clean and healthy India.

It is the Indian gesture that we people exchange sweets with our families and friends.

Many people also donate sweets and new clothes in an orphanage, old age homes and people on streets as this is the festival celebrated by the whole country and people in another part of the word.

Thus, everyone has the right to be happy and enjoy this festive season. People of India start celebrating start celebrating this festival of joy 15 days before the actual date in one way or the another. They buy new clothes, make sweets at homes to distribute among others and decorate their homes with a new color or lights.

Employers give away gifts and bonuses to their employees as the gesture of happiness for the festival and this same thing continues in the family, the family head or Karta of the family give gifts to the members of the family. People also make Rangolis (traditional Indian art made with dry color) on entrances with colors.

I think it is much clear by now that how this festival, Diwali is celebrated in India but do you know why it is celebrated? What is the reason behind whole activity on the grand scale?

I have told you before that Diwali is the symbol of ‘victory of light over darkness’ or ‘victory of good over evil’, it is known as so because Lord Rama had killed Ravan for kidnapping his wife Shri Sita and the day when Ramji took Sita back to his hometown Ayodhya, the day is celebrated as Diwali.

As there was joy all over the place that Lord Rama comes back after 14 years of vanvas with his wife and brother Laxman. Therefore, people of Ayodhya decorated the city with diyas and flowers for their welcome and since then the ritual is being followed.

Now, there may be many questions in your head that how Sitaji was kidnaped? Why they went to vanvas? Who was ravan? The answer of all your questions are listed below;

Let me lead you with the trail, Why they went to vanvas for 14 year?

Kaikeyi stepmom of lord Rama demanded from her husband Dashrath to fulfill her two wishes i.e. to make her real son Bharat king of Ayodhya and send lord Rama for 14 year vanvas(stay in forest) because as per the land laws it was clear that if the rightful king of the city is not there for straight 14 years will loose the authority to be the king of that land.

It was her greed that made her do all these bad things. Therefore, lord Rama with his wife and brother Laxman went to vanvas.

Now the second question arises who was Ravan? 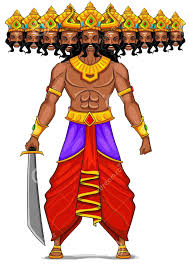 Ravana was the believer and follower of Lord Shiva. He was the great scholar and capable ruler but always wished to overpower the devas.

He is also considered as one the god in most part of India, Sri Lanka and Bali(Indonesia). But ravana has committed sin when kidnaped the wife of lord Rama for having cut off the nose of her sister shurpanakha.

How does Ravana kidnap Sita?

It was hard for ravana to go even near Sitaji while she was at her home in fthe orest. But Ravana took the appearance of the priest known as sadhu and asked for food and help from sitaji. As sitaji was innocent and unaware of the cruel intentions of ravana offered him food.

But still, it was hard for him to take her along because her brother in law laxman drew a protective line around the house for her safety and while the line is exists no-one can trespass that boundaries except sitaji herself.

Therefore, ravana played wisely and convinced her to give him food while crossing the protective line.

The moment she crossed the line popularly known as laxam rekha, ravana kidnapped her and take her along to his place.

Lord Rama asked for the release of her wife in every polite way possible but Ravana refused to deliver her.

Thus, Lord Rama had to take a step and travel all over to Ravana’s place with his army.

It was not all over yet, Sita ji after her dignified release had to go through fire test known as ‘Agnipariksha’ to show that she was still as pure as ganga even after her stay at Lanka.

This was the story behind the celebration behind the great festival of joy, Diwali. It is celebrated as pure as sitaji by the people of India. On the climax day i.e. on Diwali, they do Pooja as a gesture of purness.