Mangalam Srinivasan, 51 year old mother and a homemaker turned into social media star for making kolam. Kolam is the traditional art of drawing rangoli designs which are generally made on festivals or auspicious occasions from chalk powder/chalk/rice flour/rock powder.

Daughters of Mangalam showcased her kolam designs on facebook page named “MY MOMS ART GALLERY” which has gained 95,000 likes as of now. People from all over the world are showing their love for her kolam art and are also keen to know more about this unique south Indian traditional art.

Mangalam’s draws kolam from rice flour and rangoli powder. Her kolams height varys from few inches to 11 feets. As she made 11 feet beautiful kolam of Lord shiva. She has also made kolam of late chief minister J Jayalalithaa, a day after his demise i.e. December 6 as tribute to him. It usually takes 1-12 hours for making perfect kolam or it depends upon the final image of the art one wanted.

Mangalam in an interview revealed that she has learned this unique art of making kolam from her mother during her childhood. She has also learned tanjore panting with the given opportunity of tamil nadu government. Earlier her painting was limited to her family but now facebook page has given her wider audience.

Mangalam’s husband SV Srinivasan, who is now general manager at BHEL, helped uploading her kolam art procedure as tutorials on YouTube. Mr. Sirinivasan himself shoots and edit the whole procedure to tutorial videos. 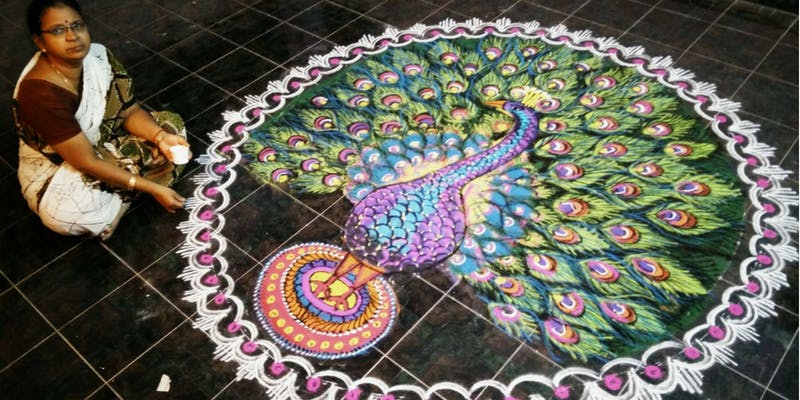 Mangalam also reveals that she often finds it tough to get the correct shade of the gold zari in the powder for her kolams, in an interview with The Better India. After working for several years, she has mastered the art of turning powder to the shade of gold – with a mix of lemon yellow, ochre (a form of clay), orange, and dark red.